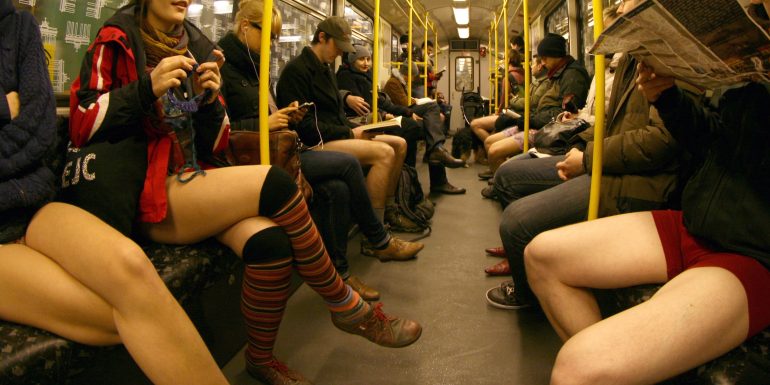 “The Only Thing That Is Constant Is Change” and we have to succumb to that. Or to the BVG’s construction plans. After 7 years of forming a true bond with the U2 it’s over. The eighth No Pants Subway Ride in Berlin is going to be on the U8 and U7.

The “No Pants Subway Ride” (NPSR for short) is a yearly worldwide event by Improv Everywhere. It started back in 2002 in New York and always happens in January. Nobody would notice the missing pants in summer, would they? It’s a kind of funny play staged in public where anybody can join – like a big improvised street theater.

When:
Sunday, 13th January 2019, 15:00
Where:
S+U Frankfurter Allee, Foodcourt at Ringcenter 2 (Map)
What to bring:
valid BVG ticket(s) and a backpack/bag/something like that, to hide the pants. Also props are nice – e.g: a comic, book, news papers; everything for a normal subway ride.
Better left at home:
cameras, alcohol, promo signs
What to wear:
what you usually wear, and if you want to, funny underwear (but please no strings, thongs, in german “Rüsselslips”, and so on)
RVSP:
can be done on Facebook (optional but appreciated)
Route:
here as PDF
After-Ride-Party:
18:00 Uhr @ Radio – The Label Bar -> Event on Facebook

The most important: the undressing part will happen in the subway. And we will leave the train only in underground stations. So it won´t be too cold. But we’ll take a group photo once again at the Weltzeituhr, which is outside apparently. Tip: wait inside the station until everyone is back. Of course bad weather can change our plans.

We will meet near S+U Frankfurter Allee (Foodcourt at Ringcenter 2, Map). At the meeting point we will split up in several groups. Each group will take a different train.
After that we enter the trains (U5 direction Alexanderplatz). Please spread use the full length of the train and move as ordinary as possible. Read a book, listen to music, talk to friends (but not about the “No Pants Subway Ride”). Act as if it’s a normal ride on the subway.

We take off our pants in the subway – meaning the cars, not the platform. If you are asked about what you are doing, say something nice like “those were too uncomfortable”, “too hot”, “they are itchy” or “Dude, did you see that guy with those pants? He is wearing the exact same type as me. I’m not doing ‘Partnerlook’ with a stranger.” Invent something, but nobody should find out that the ride is organized. Being asked why you are missing your pants “oh, well, shit. I knew I forgot something” – or anything else. It’s okay to admit that it is a little bit cold (it wasn’t in the last years).

Like that we will ride through Berlin, despite getting off and onto the trains again every now and then (the exact stations are listed below). With the U5 we are going to Alexanderplatz, there we change into the U8 direction Hermannstraße and get off at Hermannplatz. From there we take the U7 direction Rathaus Spandau to Jungfernheide and from there the same way back to Alexanderplatz. Using the U7 we will get off the trains at Mehringdamm, Berliner Straße und Wilmersdorfer Straße, wait for next one and get back in (on both ways).
For the typical group photo we gather at the Weltzeituhr. Since we are several groups, the first will have to wait for the last. (At the start the same happens the other way around, so it’s even.) And apparently we have to get out of the underground without pants. It could get a little cold, but we will hurry. Nevertheless a very useful Tip: wait inside (at the subway station) until all groups have arrived.
From there we will hit the U5 again to go to the After-Ride-Party. The place to be for that one is “Radio – The Label Bar” – Station: Frankfurter Allee.

Starting with the undies. We can’t prescribe anything and funny underwear is great, but please not in a too obvious way. Wearing two sets of undies is no problem and the better choice for sensitive bladders. But please do not wear thongs, “Rüsselslips” or other kinds of underwear that could be offensive. Also please be aware of “hang outs”. And of course wear underpants. We want to make people laugh and not annoy them.

You also have to behave inconspicuously when it comes to taking photos or videos. Please take as few photos as possible and don’t use (D)-SLRs or something else that is big. We have some photographers and videographers. You can enjoy the ride and still can get pictures afterwards. I would be happy to do so! That also counts for media representatives. Taking photos before and after the ride is totally okay.

Furthermore please bear personality rights in mind – those of yourself and other participants. Of course it is a public event and everybody is showing their booty by choice. But even for the most lovely ones it isn’t nice if it is specifically filmed or photographed. If you notice somebody doing so, show teamplay, place yourself in front of them and/or talk to the person.

If you want to tweet about the ride, please use the hashtag #NPSR (No Pants Subway Ride). You also could mention @improvevery or us @marmarberlin!

(yes, the quote at the beginning feels like writing in Comic Sans…)